What is Mai? The better question is “who?” She is the daughter of Chef Allen and Eden Hess. Who better to represent the restaurant’s down to earth atmosphere and playful dishes? She loves the bacon business. Don’t forget to try the Ka’u coffee cured, homemade bacon which also carries her name.

Chef/ Owner Allen Hess has fun plating his passion at Mai Grille. A Chef’s Chef, Allen Hess worked hard in legendary Big Island kitchens among legendary chefs Peter Merriman, Alan Wong, and Roy Yamaguchi. After a stand out role as Head Chef at Merriman’s in Kamuela, Chef opened his first restaurant, Allen’s Table, in Kamuela. To much acclaim, he then applied his “slow food” vision as Chef de Cuisine for Mauna Lani Bay Hotel’s esteemed Canoe House. Mai Grille is his latest (and greatest?) kitchen. He leaves his mark with a bold and progressive take on regional cuisine.

Allen values local farmers, fishermen, and ranchers. Many are friends. After all, their passions support the slow food dishes for which Allen is best known. One story goes the idea for a “buttery beef” was born amidst friends and some beers in his Waimea backyard. He paid a buddy, who owned an orchard, to drop a truck full of “butter” avocados for the cows. The results were imaginably good, we are told. Never afraid to be creative, “I’m inspired by good food, food that’s fun, really flavorful, and visually appealing.”

Look for a modern and sophisticated spin on some local classics. “We are excited to take a familiar dish, and try new things with it.” Set in a light-filled, open & modern clubhouse, Allen feels good food shouldn’t be stuffy, “We’re inviting people to eat the way chefs like to eat, the way we eat in the industry, with lots of options to choose from.” Bring your crew and see you at the clubhouse!

Click the image to read the complete article or watch the video.

Mahalo Nui Loa to our Friends,

Thank you for your passion. 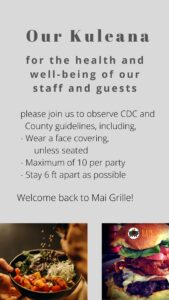